While you are on a Holy Land tour, you will have the opportunity to taste, and possibly make, the delicious Arab dessert called Kanafeh. 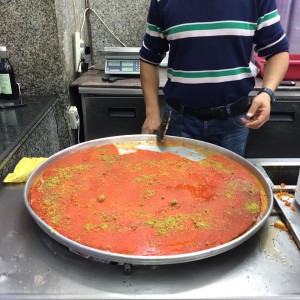 This dessert is easily recognizable from its neon orange appearance.  Kanafeh essentially is cheese soaked in a sugary, sweet syrup.  The base is shredded noodles, usually kadaif noodles.  Then the cheese is made by combining milk, cream, sugar and cornstarch.  It is poured over the noodles, then drenched with syrup. The syrup is made from a combination of lemon juice, sugar, and orange flower water. After the Knafeh bakes in an open fire, it is flipped, drenched in more syrup, and often sprinkled with crushed pistachios.

Prior to my first time eating Kanafeh, I was a bit hesitant to try it.  Although I grew up eating foods with artificial colors, the neon orange top of Kanafeh had taken me aback.  My friend encouraged me to taste it, and I’m happy she did.  After I had eaten my slice, I went after her leftovers!

Note: After some research, the bright orange color is most likely just from the noodles being drenched in syrup.  Nothing to fear!

Kanafeh is usually made during the Muslim holiday of Ramadan throughout Arab countries, but here in the Holy Land, it is a year-round dessert.  It is argued that Nablus has the best Kanafeh.  However, I recently went with a friend to Damascus Gate (the popular entrance to the Muslim Quarter of the Old City), and “Ja’Far’s Sweets” had delicious Kanafeh. However, I must mention that I do not have a matured Kanafeh taste buds…yet!

This is not the kind of dessert that you quickly eat.  Therefore, I recommend eating this dessert after a full-day of touring.  While eating and then fighting a food coma, it is a great opportunity for you to bond with other participants in your group and reflect on the past day’s adventures.