200
swing
You are here: Home » Culture » Baking bread in the Holy Land

Baking bread in the Holy Land

The 12 square meter kitchen might be cramped but there is nothing small about the taste of the artisenal breads created by Les Saidel in his tiny workspace in Karnei Shomron.

Meet Les Saidel, a South African immigrant who learned the art of baking from his mother at the age of 13. However, he wasn’t to find his true calling as a specialty bread baker until his mid 40’s, after he lost his job in the high tech industry when his employer went bankrupt. Left with no job and no real means of employment in high tech (four mouths to feed including one special needs child) – Les opted to go back to his roots – and become a professional baker. 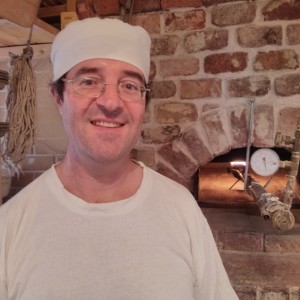 Les Saidel in front of his home made brick oven

He received a break baking degree from San Francisco Baking Institute and rather than purchasing a 40,000 Euros commercial oven which he could not afford, he spent $650 and purchased professional blueprints from Alan Scott, a professional brick oven designer based in Tanzania. Alan coached him through the entire building process – it took two months for Les to build his world class oven, that contains over six square meters of baking space. 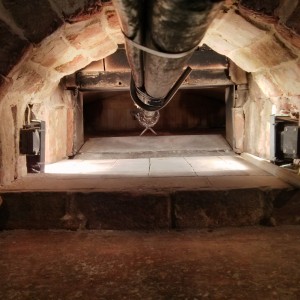 Then he had to find the right starters. Through Ed Wood, a chemical engineer based in Saudi Arabia, he purchased sourdough starters from Austria, Saudia Arabia, San Francisco and other places. With great care Les feeds the starters daily and continues to grow his own cultures for his bread making.

The variety of sourdough starters

The results speak for themselves.

The bakery is too small by local health standards to be licensed as an official bakery so Les runs professional bread making workshops for small groups out of his home and kitchen in the heart of the community of Karnei Shomron, a small settlement community 30 minutes from Tel Aviv.

During his workshop, Les explains that he didn’t move to the community for political statement at all but rather because he was seeking a rural atmosphere, good schools, warm community and access to the big city. Interesting story which Les is happily speaks about during his engaging workshop. They use to live in Beit Meir outside of Jerusalem, but wanted a more pastoral setting and quality of life.