Alongside the colorful spices, handmade pistachio nougats and the seasons freshest vegetables, the smell of flavorful Turkish coffee permeates the alleyways of the ancient walled city of Akko. Known for its Crusader fortress, a designated UNESCO World Heritage site, along with many other fascinating attractions, Akko has always been a favorite local tourist attraction but somehow most foreign tourists to Israel simply miss it for lack of time. Big mistake. 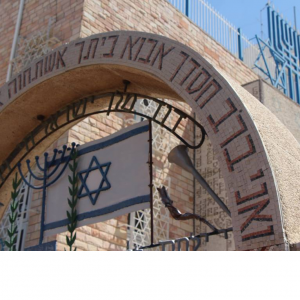 One of the six arches fronting the synagogue

In our most recent Akko tour we spent an afternoon just outside the old city walls, at the Or Torah Tunisian Synagogue in Akko, known as the “Jariva” – a mosaic encrusted four story building featuring millions of floor to ceiling natural mosaics-each depict the story of the Jewish people, from the beginning of the biblical period through modern times including Israel, Zionism, the Israel Defense Forces (known as the IDF), and more. It is the only synagogue of its kind in the world. Built after the massive El – Ghriba Synagague in Djerba, the intricate and elaborate design represents one man’s vision, Zion Badash, an 80+ year old Holocaust survivor from Tunisia. Most people don’t even realize that many Tunisians were also rounded up and tranported to European concentration camps. Zion, now over 80, has dedicated his life’s work to the synagogue – he became involved with the shul in his 20’s when the state gave the building to the local Tunisian community and has overseen every inch of the ongoing development since then. 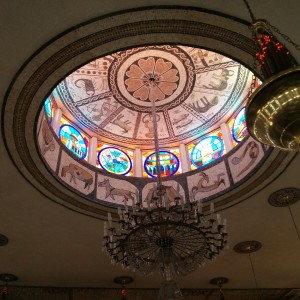 Mosaic and stained glass domed ceiling inside the synagogue

Communities from around the world have helped in funding the development, bit by bit and new mosaics, all of which are designed by Badash and then created at nearby Kibbutz Eilon, are continuously added. Our tour guide, Verkene, a local Akko resident, commented during our visit that there was a new mosaic on the floor that hadn’t been there the last time she visited a couple months back.

The structure includes 140 stained glass windows depicting many scenes from Jewish history and millions of natural mosaics covering almost every inch of the building’s floors, windows, steps, ceilings, hallways, stairwells, even inside the seven arks where the torahs are kept. However, there is one small section of a stain glass window mosaic on the first floor that is not unfinished. Our guide explained that this was on purpose, because Badash wanted to ensure that there would be imperfections because nothing created by man should be perfect.

On most days, Badash can be found on the main floor, chatting in Hebrew or French with visitors and telling his own personal story of survival.