There is a simple rule that goes when you are speaking to Israelis-1. Israelis think they are always right. 2. If they are wrong, refer to rule number one. These two golden rules are a given in Israeli society and its normal to hear two men arguing over whose mother makes a recipe better, even if the recipe originates from a few different places. So the next few blog posts are going to focus on the origins of various Israeli and Palestinian recipe and their origin(s). Try ‘em out and let me know what you think!

Shakshuka is a staple of the average Israeli diet, eaten either for breakfast or dinner. It consists of a tomato vegetable mixture and a sort of sunny side up on top of the mixture. Oftentimes shakshuka is served with bread as it’s a great dish to dunk a warm slice of bread in. There are two keys to this dish- the tomato mixture recipe and how the eggs are cooked (rare or well done).
In my family the tomato mixture is the deciding factor on whose shakshuka tastes better. I prefer a more mild mixture whereas my brother likes to add schug (a spicy Yemenite mix of fresh hot green peppers ) to his shakshuka.

The origins of the shakshuka dish are said to have founded in North Africa- Tunisia, Lybia, Morocco, and Algeria. The recipe was then brought to Israel by new immigrants. But others say that it was founded in the Ottoman Empire and the dish spread throughout the lands.
There are many different additions to this dish, depending on which country you are in. Some add sausages, others lamb, but in Israel the dish tends to be vegetarian, with additions of Bulgarian cheese, Mozzerella, swiss chard, eggplant or spinach. Those who are vegan can skip the egg part and stick to the sauce. One of the most famous places to eat Shakshuka is at Dr. Shakshuka in Jaffa which opened its doors some 20 years ago. The restaurant which specializes in homecooked Tripolitan cuisine is run by Bino from Tripoli and for the last 20 has been an institution. 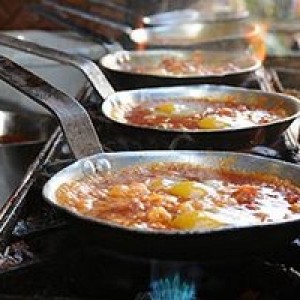 Here is my secret Shakshuka recipe:

Chop onions and sauté until golden on flame, add tomatoes- let simmer until soft. Add green pepper, and minced garlic. Sprinkle sugar in mixture. Add spices to taste. When mixture is ready, crack the eggs in different areas of the pan and cook to taste. Sprinkle Cheese on top! And, as they say in Israel, “Bitay Avon” – (aka bon appetit)!